November Newsletter Sundays at Seven Show and the IP Wars

This can also be read here: newsletter
Please sign up to laughjohnlaugh@gmail.com with add me to mailing list as subject
to get newsletter & receive VIP deals, inside news and discounts.

I will be the musical guest at this established comedy event.

https://twitter.com/SundaysatSeven
One of NYC's longest comedy and music shows produced by Ann Design and Fiona Walsh at the Irish Arts Center.

I got a notice last week that my using the words "Hello World" on my design of the leaping man products in my Zazzle merch store infringes on a Trade mark someone else owns. I got 'bout fifty million emails for each iteration of the design that had the word 'Hello World' written on it.

It's kind of a perplexing one really as every beginner coder ever since the dawn of coding in DOS language has used as their initial lesson to print "Hello World" to screen. I did n't know a much used phrase could be captured and owned forever. That is the future, one where the IP ownership of everyday objects that were assumed to be held in common will become 'private property' of an individual; and a corp.

I understand conceptually but it feels complex & weird to get a notice to get off using the phrase 'Hello World' . A bit like the bewilderment of the Indians might have felt when they were told cause they didn't have a deed for their common land that it now it belongs to Mrs White of Idaho™ and they can get off somewhere else.

Being told to go because of IP laws is a whisper something similar to the native Irish being told to "Hell or Connaught™" c/o Mr Cromwell or having the real Cadbury's Milk Chocolate being declared illegal here in USA.


Now there's no land countries left to colonize, so some next thing is to own and grab Intellectual property IP like 'language' or phrases within the language. It is a new digital territory. Hold onto your choice phrases folks or re-learn your Irish so you will at least have something to say about it all.
Get the last of the mugs and buttons!

The IP 'death creatures' overlooked a few of my treasures - you would be a mug to overlook them too!
Good news temporarily there are still a few small things they have not got around to killing off - like a mug, a button and a tote bag... so if you felt like supporting my art ... now might be the only time to get a one off collectors piece - It could be your penny black or just something you drink coffee from; you decide. 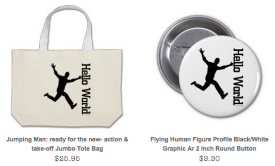 Use Code: HOLIDAYSENDS at checkout as coupon for 20% off a mug, postcard, button or tote with the Hello World images still on them. Sssh ...
Tote Bag: jumbo_tote_bag
Postcard:- flying_figure_black_white_art_postcard
Button: - lying_human_figure_black_white_2_inch_round_button
Mug: - leaping_man_mugBonus Discount: - Bonus discount code for $5.00 off your next purchase of $20.00 or more: UQGGPMRSLKJRBBQFLGBT.This code expires on 11/9/2015.

September 18, 2013
Hello Mad World - #baseseventynine in cahoots with YouTube.com to bully the little guy - scam alert. BASE 79: Scam Alert for Creators: there is a massive company scooping up and claiming ownership to any and everything . It's called Base79 Music, a spin off off of some of the youtube execs. Their thing is to claim they own part of your work and therefore deny you access to the pennies you might earn from it.  So lets say I want to monetize my video - they run it via some database (I dont know how) and then say some one or one of of their partners own a right to something in my/your video.    This just happened to me on legends. I made everything on this video and some jerks can come along and say they want a piece ! Oii we need some rights - privacy, ownership a chance to make something and say I made that. Very like a mafia shakedown.  LEGENDS link - please take a moment to play or share this - stand up for the little guys - http://youtu.be/rf5QedtNi5w Anyway I digr
Read more