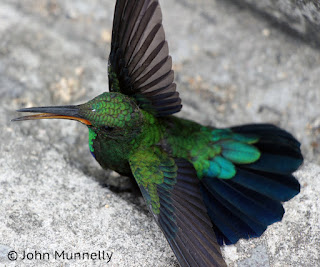 RAWGABBIT
A rawgabbit is somebody who speaks in strictest confidence about a subject of which they know nothing at all.

Well so we now know now about the Rawgabbit, but what about the opposite creature - the antigabbit. The antigabbit is similar but instead of quietly they speak loudly and forcefully about subjects they nothing about. No clue they have and they go on and on and on. Can't help but think of the anti-gabbit press conferences held early in COVID times. Self bleaching, swirly lights and loud noises to scare the tiny whiny COVID Novella bugs? That iss pure anti-gabbity. Anti-gabbity is the force used by liars to suspend others disbelief and reverse normal sense and criticial thinking. Some rare people have natural affinity for anti-gabbity and can focus it through their front blowholes. And why do I keep wandering back into using the orange headed pumpkin presidential in the white house as the typical and untypical anti-gabbit.

It could be a netflix film - cue the deep voice “Just when you though it was safe to go back in the polling station came the anti-gabbbit. Sometimes there's a touch of the rawgabbitt about the followers of the anti-gabbit. They are susceptible to the wiles and energies of anti-gabbity. tentative Trumpgabbits. These Rawgabbits don't really know you humanly, so they are colleagues, a boss sometimes. A boss like my new supervisor who put out feelers to see if I was one of them. It felt momentarily like the floor had been removed and like at the end of the  movie Invasion of the Body Snatchers. People you thought were friends suddenly reveal themselves to be angry, spiteful and mean A kind of opposite Capras Delusion they think we are the replaced. They are the superior partis and everyone else is lesser if they dont worship the Uber Orange-Fuhrer. It's like a secret unfraternal society. The Loyal Order of RawGabbits. Acronymically it is LORG or phonetically LORGS they are sometimes referered to as The Lorgs of the ding.

Speaking of ding, is the time up? I dunno if I can con-volute much longer. But speaking of true raw gabbitery... I know you would be very interested to hear that Louisa from accounting is having a fling with that hunky dunk IT manager. I overheard him saying to her that she needs to clear out her drawers and then he was going to reset her IP config. Jeez. the dirty basket! Technically he is not her supervisor though so it would be a case of consenting colleaguery. I had my IP config reset one time, fantastic experience, just between ourselves of course, don't say a word about this to anyone…

An ultracrepidarian is a person who offers opinions beyond their own knowledge. Somewhat liked to the gabbywhatsit above.

Fopdoodle A stupid or insignificant fellow; a fool; a simpleton. A follower of a lying president or a person who played a President on his own TV show.

Snudge: To snudge is to stride around as though you're terribly busy, when in fact you are doing not a lot. Now we are all on Zoom calls all the day long  instead of presenteeism in the office -  this might be the end of all of this snudging around.

September 18, 2013
Hello Mad World - #baseseventynine in cahoots with YouTube.com to bully the little guy - scam alert. BASE 79: Scam Alert for Creators: there is a massive company scooping up and claiming ownership to any and everything . It's called Base79 Music, a spin off off of some of the youtube execs. Their thing is to claim they own part of your work and therefore deny you access to the pennies you might earn from it.  So lets say I want to monetize my video - they run it via some database (I dont know how) and then say some one or one of of their partners own a right to something in my/your video.    This just happened to me on legends. I made everything on this video and some jerks can come along and say they want a piece ! Oii we need some rights - privacy, ownership a chance to make something and say I made that. Very like a mafia shakedown.  LEGENDS link - please take a moment to play or share this - stand up for the little guys - http://youtu.be/rf5QedtNi5w Anyway I digr
Read more

March 16, 2009
SonicBids and TAXI - PAY to PLAY Sonic Bids is a membership site that allows you to build an online Press Kit and search for gigs and songwriting opportunities. In Sonic Bids case the user joins the site usually to enter some kind of competition to get a gig or enter a songwriting competition. Seems OK so far but we the members still have to pay another entry fee for the opportunity. Perhaps I'm a malcontent ( I can be a pain if needs insist) but nothing much comes of the investment of funds except it seems that the already impoverished musician lays out even more money to pay to play. Pro's and Con's THE EPK Electronic Press Kit does tell you how many hits it has received and is not a bad thing at all in itself but you should get something so is that it? What seems to me to be happening is that the musician is getting stiffed in the deal. The Promoter gets some cash and the site gets cash but what do I get Oh Oh What do I get! as the Buzzcocks asked once upon a time.
Read more