Showing posts from July, 2015
Show all

Bono, Yoko The Edge and Me at the John Lennon Tapestry and Inaugural Day Ellis Island July 2015 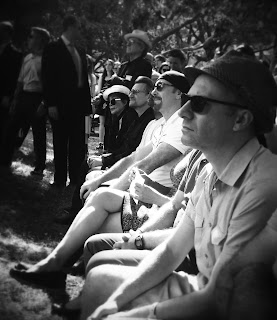 July 29th 2015 Ellis Island Yoko, Bono and Me. John Munnelly with Bono, The Edge and Yoko I was invited to Ellis Island as a guest of Art for Amnesty International  to participate in an event to inaugurate John Lennon Day and the unveiling of a 'Thank You' Tapestry to Yoko Ono for her donation of the rights to John Lennon's music to Amnesty International. Bono and Yoko spoke about being an immigrant and specifically about John Lennon's struggle with the powers that wanted to deny him an Immigrant Visa - a Green Card into America.  Bono claimed all the Beatles as Irish-  it was a fun and humorous speech. Later they unveiled what might be described as a Yellow Submarine crossed with Manhattan-Whale Tapestry in the Registry Hall of Ellis Island. Lennon appears on the top of the commissioned Artwork holding a peace V sign. Because I am a social justice singer, an Irish immigrant who sought a green card and also a musician/song-writer I fel
Post a Comment
Read more

LaughJohnLaugh the Blog is back after a technical and admin S-hiatus  Maybe I'll add to this story of horrors with CHASE and GODADDY (or maybe I won't) but anyway LAUGHJOHNLAUGH.com is back   Re Release of ALBUM ‘HELLO WORLD’ on 07/14/15 Re Release of The Big Bum Song 20/06/2015 Over at Hello World HQ,  John Munnelly  has re-released ‘Hello World’ the album in a radio-friendly edit (aka no naughty words).  Get it on special deal at Amazon for only $7.99 - http://bit.ly/ HelloWorldAmazon iTunes – Big-Bum-Song-Single on iTunes Big Bum Song released through new Digital Distribution 06/20/2015  John Munnelly is an award winning ASCAP singer-songwriter with a social conscience. Born in Ireland now of Brooklyn.  Known for his witty & humorous nature sometimes performing under the stage name ‘LaughJohnLaugh’ See his fun and colorful videos online at youtube.com/laughjohnlaugh
Post a Comment
Read more
More posts