Showing posts from October, 2012
Show all

Smile and be a villain - 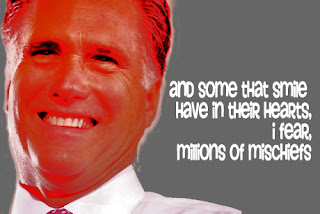 We are at the stake And bayed about with many enemies; And some that smile have in their hearts, I fear, Millions of mischiefs. " O nce upon a time in a land far away called New York I had a CEO" He was a boring man but could spin a tale of great future with wily persuasiveness but strange lack of accountability. It turned out to be nothing but mooncheese. Moon Cheese was what I termed and invented to label fabulous fallacy and undeliverable promise. "G ood people get cheated, just as good horses get ridden..." He sold us a lot of moon cheese, he told a lot of tall stories and gave empty promises and always we paid the price and he gained. He gave away something that was of no value and certainly could not be cashed in and always took. So onerous and so un-genererous and cruel. He had a gift for the untruth and used our human sympathy against us and replicated human emotional empathy in some way. But he was cold inside and would not as we
Post a Comment
Read more 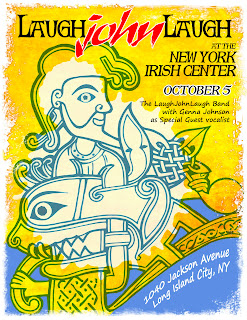 Why LAUGHJOHNLAUGH Why?  I was a happy child ... neighbors and relatives would peer into my cot and say "laugh! John laugh! so I would ... &  later on in life when I was seeking a suitable and appropriate name for my musical act it seemed like a good one - especially when I was holding down a day job and was gallivanting around the city gasp 'songwriting'. I believe it has a positive upbeat feel and yes I'm very funny and entertaining but I'm not a comedian... at least not yet. I have a band and we do anything from a sweet duet a la 'Once' - falling slowly to a trio with a rad upright bass for a sonically rich but acoustic sound or go for a full band with percussion drums and extra mountain-y and Irish instruments like Banjo/Mandolin and Accordion. John Munnelly the band leader is a multiple award winning songwriter well known for ASCAP award 'The Unemployment Blues" and the online youtube 'hilarious' video sensation - &q
Post a Comment
Read more
More posts