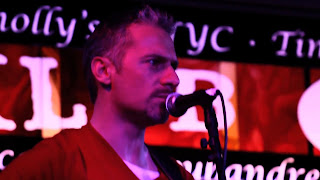 The LaughJohnLaugh project with the Irish songwriter John Munnelly has existed since 2008 winning an ASCAP award on the way for the quality of songwriting.

The band has developed and grown organically since then and in the last two and half years got a solid core of 4 members consisting of a rhythm section and female vocals with a sometimes cast of other musicians on accordion/banjo/mandolin depending on show requirements or material to be covered.

John met the drummer on a train 3 years ago and immediately began a friendship over their mutual love of the Carribbean, the bass player was recruited online from an ad 2 years ago and says “ I loved Irish music, so when I saw an opportunity to do it,” he said, "Yes, please."

The female vocalist has been appearing on John’s recordings for a number of years so it was a matter of putting all of us together for live shows. The band has put out a number of singles accompanied by witty and humorous YouTube videos and recently were referred to as “grin inducing” in the press for their contribution to the Together for Christmas CD released 2012. Band is based in Brooklyn with occasional forays home to Ireland.

Their music is eclectic, soulful but always with a lyrical depth and a finely tuned wit.