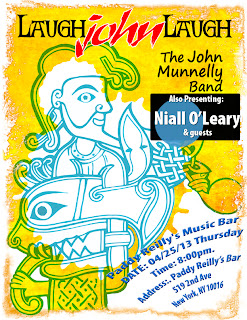 John Munnelly is an ASCAP award winning songwriter for 'The Unemployment Blues' and known for the online youtube 'hilarious' video sensation - "Does my BUM look big in this?"  and the critically acclaimed 'Happy Christmas' song on the recent Contemporary Celtic Christmas Collection from another IBO member PR/Producer Anita Daly. He is a musician/band leader of The LaughJohnLaugh Band and IBO member living in Brooklyn and originally from Cavan.

He writes in a wide array of styles encompassing themes from the humorous to the serious. His material usually contains positive uplifting messages dealing with life and the human condition with unique wit and insight. His band plays a mixture of Irish Contemporary and Celtic Songs, Rock/Pop covers and Original Material.